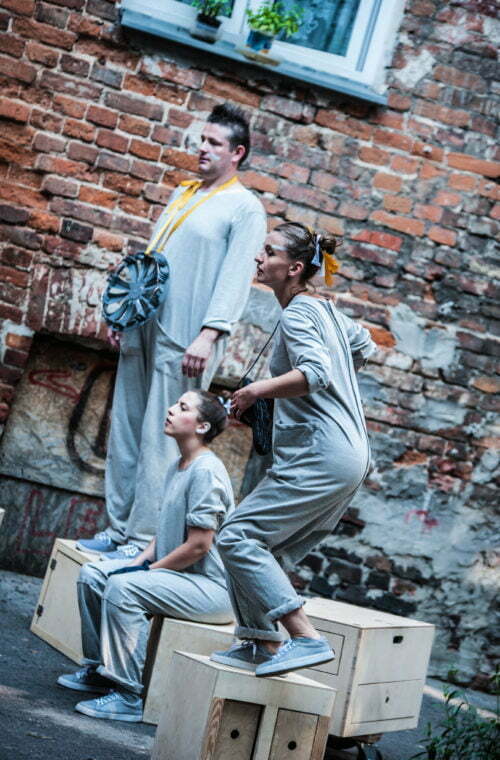 ‘In the Circle’ is one of the most important pieces of a great Polish poetess called Krystyna Miłobędzka. After decades, this cutting-edge play finally comes back to our theatre. This time it won’t be performed on a traditional stage, but on a local courtyard, in the centre of the world created by the poetess. The circle—a magical space drawn by a kid on the pavement of the courtyard—becomes a starting point for the characters of the play to understand the complex rules that organise our social life. The circle is above all a place of uninhibited creation and imagination. The underlying question of the play is: is it better to stay in the circle on your own and build the world all by yourself, or to open up to others, letting the difference between ‘you’ and ‘me’ fade?

‘In the Circle’ is performed in the intimate space of the courtyards of Praga for their residents, and therefore it is closed to the wider audience. The spectators set off on a journey whose end goal is to foster a relationship between our Theatre and its young audience. The relationship we are aiming to build is not only an artistic one, but most of all a neighbourly one. The project ‘Theatrical carriage in the courtyards of the Praga district’ means not only abandoning the theatre walls and performing in the nearby courtyards, but also bonding with the kids and their surroundings, and forming a relationship in which both sides are equally important.

It was possible thanks to the financial assistance of the Capital City of Warsaw within the city’s Integrated Revitalisation Programme for the years 2014-2022. Partner of the project: Theatre Educators Association. Cooperation: Group for Education and Social Animation of Praga-North, LUB/LAB.